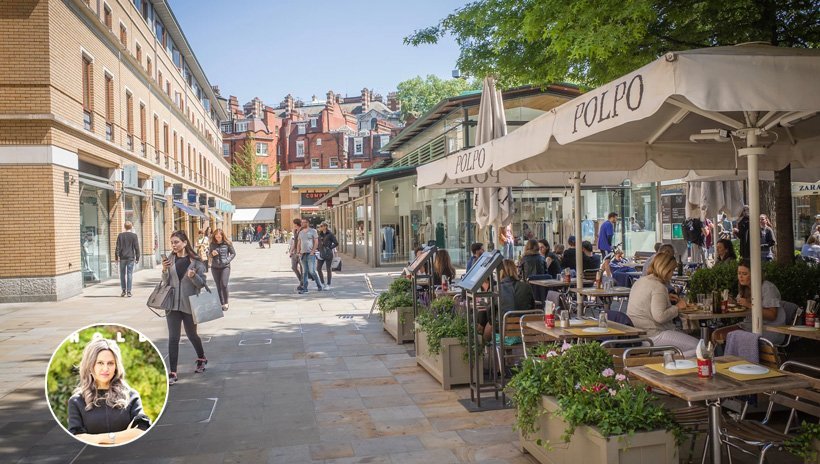 I’m sharing with you today, a few lines I wrote in my diary whilst in Chelsea. It comes as no surprise that Chelsea is such a popular destination for overseas visitors, investors, and expats from different regions across the world, America, Europe, GCC, Hong Kong and India alike.

I start my day with a fresh juice & breakfast at the iconic Bluebird in Chelsea situated on the prestigious Kings Road. Seated downstairs in Bluebirds Cafe and Courtyard, it is a tranquil haven with a casual and laid back vibe, an absolutely ideal place for the start of my day. Sometimes I sit and people watch whilst reading a good book, spotting celebrities here is quite common. Back to the subject of food, a weekly food market takes place at Duke of York Square another SW3 hotspot. I just can’t help but be tempted by the oysters and sometimes even a cheeky chocolate muffin. The Kings Road has just so much to offer for foodies, its always a great place for a meal or even just one of the mouthwatering treats on offer. For casual dining I love Comptoir Poilâne which offers some of the best bread you can find in the city. Or for an exquisite fine dining experience, one can head to The Ivy or Gordon Ramsays restaurant, just to name a few, amongst a plenthora of other choices.

History of The Kings Road

The Kings Road is the core of Chelsea, with most activities revolving across the stretch of the road. It has an incredible history, taking its name from having once been the private road for King Charles II to travel to Kew in the 17th century. It runs from the Sloane Square border at Knightsbridge & Belgravia all the way through to the Chelsea Design Quarter which borders Chelsea and Fulham.

Once I’ve sufficiently devoured on the food culture, I head to the shops for my dose of retail therapy. This chic and leafy neighbourood hosts an eclectic mix of trendy boutiques and countless luxury brand names as well as the high street staples and not to mention the one and only Harrods. You will find designer boutiques fit for royal families as well as affordable high street fashion names. There is something to suit every mood and budget. The Sloane Street is internationally known as the most exclusive and luxurious shopping destination, where you will find brands such as Tiffany & Co, Gucci, Chanel, Louis Vuitton and Cartier. It’s is a dream for the luxury shopper. Alternatively, today, I may take a wander through Peter Jones, the well known department store which features household names such as Nike, Neals Yard and French Connection. Across the road one can stroll through the Duke of York Square, in the open air, and visit shops such as Zara, Ted Baker and Links of London. It takes all my self discipline and determination to tear myself away from these enticing stores. However, before I move on from the shopping scene, I must recommend everyone to visit Vivienne Westwood’s iconic shop where Londons punk culture was born in the 1970’s.

Being surrounded by the treasures of Chelsea, I would highly recommend a trip to The V&A Museum (The Victoria and Albert Museum), for the creative and inspired souls amongst us. The world’s largest museum of both applied and decorative arts and design, it is home to a permanent collection of 2.27 million objects. The museum represents more than 3,000 years of human creativity. A visit to Chelsea however could not be complete without a visit to The Saatchi Gallery, which is filled floor to ceiling in contemporary art, set in a spectacular exhibition space of 70,000 square feet. Though, I must admit my personal favourite to be The Natural History Museum thanks to the Dinosaur Gallery.

As as an avid walker, whilst in Chelsea, being situated just north of the River, I love taking a late afternoon stroll along the river at Chelsea Embankment. I find this to be amongst the prettiest parts of Chelsea. With numerous heritage houses situated at Cheyne Walk, as well as the river boasting glorious vivid colours from the houseboats with their impressive flower boxes. I take a right off the Chelsea Embankment to enter The Chelsea Physic Garden. Founded in 1673, it is a stunning botanical garden steeped in history. It was first established by the Apothecaries to grow medicinal plants. It now houses around 5,000 different medicinal, herbal and edible plants.

The Beauty of Chelsea in Bloom

I cannot ask for any more charm from a location. To even further enhance the allure, Chelsea holds a number of annual events such as The Chelsea in Bloom and The Chelsea Flower Show in May. Chelsea in Bloom sees shopfronts and public areas around Sloane Square, Duke of York Square, Sloane Street, and the King’s Road explode in a riot of fresh flowers. It’s breathtaking to see the neighborhood come alive with so much color during the event.

Chelsea has something to offer for everybody, with the Chelsea FC located at Stamford Bridge and the Hurlingham private members sports club at Fulham, theres no shortage of activities for sports fans. The Hurlingham Club is set in 42 acres of magnificent grounds on the River Thames. It is recognized as one of Britain’s greatest private member clubs and has no shortage of social events and networking opportunities.

As the day comes to an end I decide upon spending my evening soaked in culture at the Royal Albert Hall followed by a night out at the cluster of venues situated at the trendy Lots Road. Lets take a moment to really appreciate the marvel of this iconic structure, The Royal Albert Hall. It was opened by Queen Victoria in 1871 in the name of her late husband who had been the visionary force for the building. The distinct exterior is built from over 6 million red bricks and 80,000 blocks of terracotta. One of its most striking features is the continuous 244 metre terracotta frieze spanning the entire circumference of the Hall. This frieze took two years to complete and at its time of its unveiling it was the largest mosaic to exist. I cannot put together words that could to justice to describe the sheer beauty of this building. One must visit it, to see it with their own eyes.